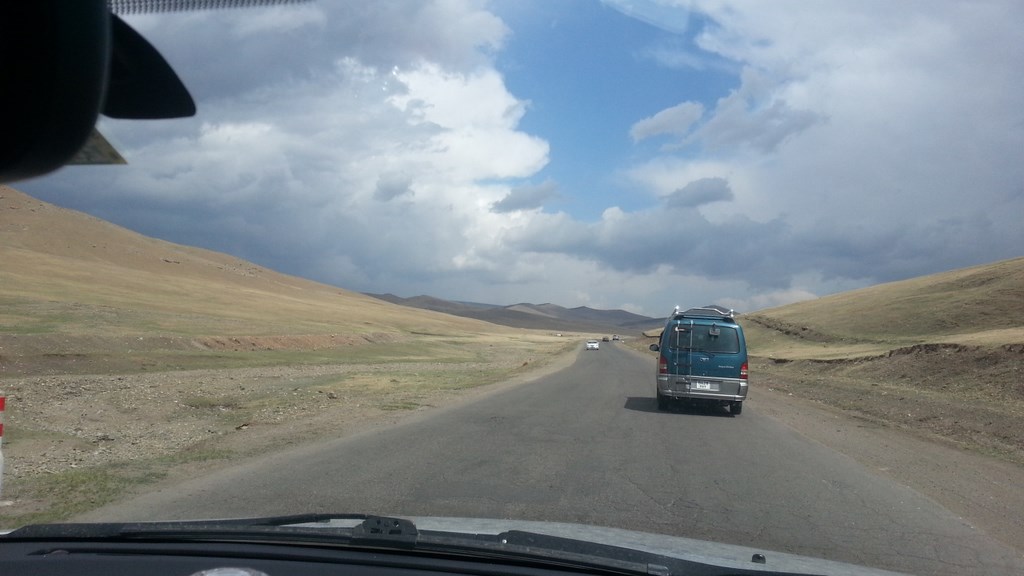 This afternoon we drove out of Ulaanbaatar, to meet with officials in Zuunmod, the capital of the the central Tuv Province of Mongolia.  The reason for the visit was to discuss with the “Aimag” (provincial authority) their governance over mining activities.  Earlier today we had met with a senior officer of the Cabinet Secretariat, in a quite formal setting within the magnificent Parliament House in Ulaanbaatar.  This official had explained the degree to which responsibilities and actions have been devolved to local government level, but the visit to the aimag at Zuunmod was to ask questions of the officials themselves (and of course to see some countryside!).

A little interactive map showing our route can be seen in Google Maps by clicking on this link.

This image shows one stretch of the road to Zuunmod and one of the minibus vehicles that use it.  This part of the one hour long drive was quite smooth, but the road clearly does suffer from a lack of maintenance and the effects of very heavy trucks that use it.  Freezing weather for most of the year can't help.  As a result, there are numerous potholes and the portions where all the tar had been removed or where detours went across dirt roads, were the best.

Just outside the little town, we stopped for the two cars to catch up to each other, and two of our co-travellers used the opportunity for a quick smoke break.

In the offices of the aimag we met the Governor of the Tuv Province, as well as the Director of the Nature, Environment and Tourism Bureau.  His responsibility extends over environmental monitoring of mining, too.  A friendly but serious and clearly very capable man, with a good understanding of his department's functions and where the major problem areas lie.  Although he spoke no English, we all had an excellent discussion with the able asistance of our translator Bayarmaa and MSISTAP consultant Surmaa.

Returning to Ulaanbaatar, with one of the four power stations visible on the left, contributing to the city's dosage of dust and smoke.

Touristic day out of Ulaanbaatar

End of a first week in Mongolia